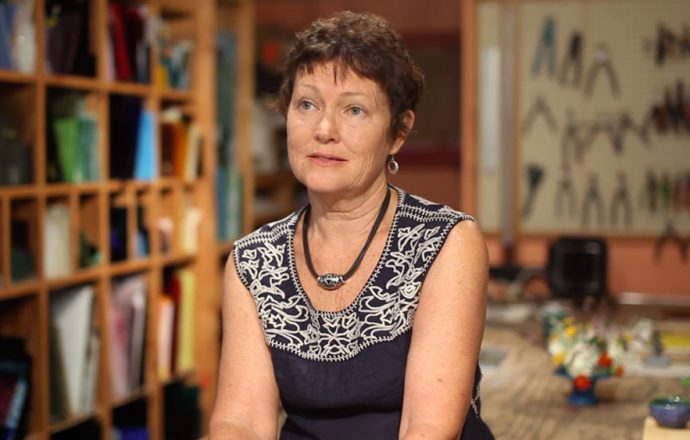 For the fourth video in the Artists of Rappahannock series, Patricia Brennan of De’Danann Glassworks talks about her longtime love of the light, color and joy that is stained glass — and how she’s managed to make a living (we’ll let Patricia tell you why she gets a chuckle out of that) as well as raise a family and learn a lot of new techniques during her nearly four decades as a glass artist in the mountains of Sperryville, Va.

Patricia is also an avid gardener; ample proof that she’s as skilled with soil and flora as she is with glass and lead can be found in the gardens that surround the home and studio she and her husband, the journeyman carpenter Don Mullan, designed and built at the end of Spyder Mountain Lane, not far from the edge of Shenandoah National Park.

I should also mention here, because it didn’t make it into the video, that Patricia was the driving local force in the establishment of the Rappahannock County Artisan Trail, which remains one of the most active and popular of the statewide trails sponsored by the Artisan Center of Virginia, and that she’s also one of the ACV’s juried artisans.

This video series was underwritten by the Claudia Mitchell Arts Fund of the Rappahannock Association for Art and Community — which, by the way, holds its annual Artists of Rappahannock Studio and Gallery Tour this year on Nov.4-5. It’s a great opportunity to meet some of the artists profiled in this series, including Patricia, and get a first-hand look at their works.