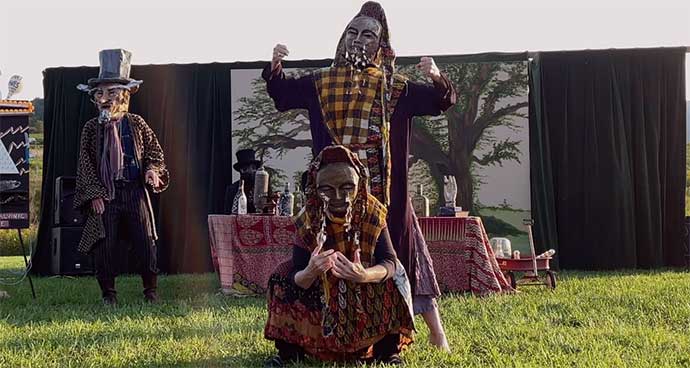 On a perfect, cloudless September day on a hillside in Sperryville, Va., with the sun slowly setting over those hazy Blue Ridge Mountains, 1000 Faces Mask Theater performed founder and artistic director Peggy Schadler's latest, "The Axis Mundi Traveling Medicine Show" — and Luke and I were there to capture it, on three cameras (still not enough, but we're learning).

We last did this in 2019, inside the cavernous and rather dark Castleton Festival Tent, which made lighting a challenge. After a pandemic year off, Peggy was determined to do the new show outdoors, where it properly belongs, since the Rappahannock County-based 1000 Faces has been, above all, celebrating nature's endless seasonal cycles for more than 30 years. So the troupe wound up on the grass next to Pen Druid Brewing, and almost all the masks were on the performers, not the record crowd spread out on blankets and folding chairs. The lighting challenge was mostly what to do about the sun setting behind and slightly to the right of the stage, but hey — dealing with endless seasonal cycles is a long tradition among humans.

The masks, the dancing humans, and Peggy's wry social commentary were wonderful as always, and Wendi Sirat and the band were terrific (and incredibly well-miked and -recorded by Jeff Wolf of Stillwaters Studios in Marshall). So yeah, we'd happily do this every year, if Peggy (and those endless cycles) will have us.