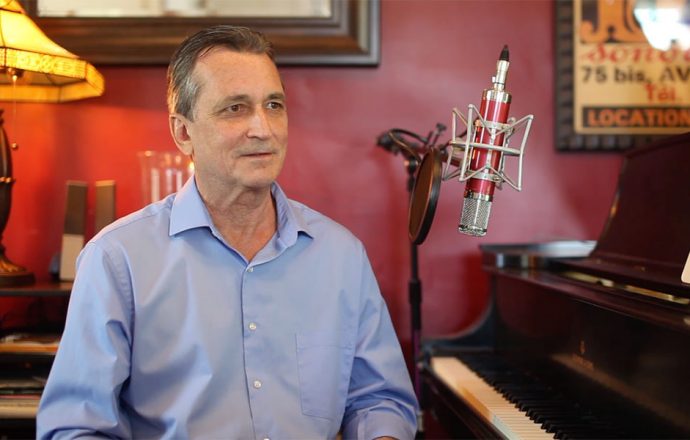 The fifth video in the Artists of Rappahannock series is different from the rest — for one, it’s a profile of a musician rather than visual artist: renowned jazz pianist Bill Harris, who shares a historic home in Flint Hill with his wife, Stella Liong, Rappahannock’s only resident dentist.

For another, the subject is actually the reason I was inspired a year and a half ago to buckle down and apply for the grant to make some videos on Rappahannock County’s considerable artist community, a grant that the Rappahannock Association for Art and Community’s Claudia Mitchell Fund saw fit in 2016 to award to me. (What none of us saw at that point was me returning to become the editor of the paper again, for a year, and the Mitchell Fund folks were kind enough to let me finish one career before embarking on this new one earlier this year.)

So it was an interview with Bill in the fall of 2015, for a short feature I was writing for the Rappahannock News in advance of a concert of his the following weekend. Though the piece was only going to be a short 500-word feature, I wound up spending a couple of hours with Bill, and then with Bill and Stella, in their kitchen, which (as you’ll see in the video) shares a large, open, sun-filled room with Bill’s Steinway grand piano. And during the course of an interview that went from jazz standards of the 1930s to how Bill and Stella met in Arkansas, Bill kept getting up and going to the piano to illustrate things he was talking about by playing and singing them. When it was finally time to leave, I realized how much of what I’d just seen would never get in the paper, and I said, “You know, this afternoon really should have been on video.”

Well, it’s not that afternoon but a couple of others more recent that are finally on this video, in which Bill talks about, plays and sings some Cole Porter (for an upcoming tribute concert this Saturday night, Oct. 21, at the Little Washington Theatre). He also touches on dentistry, DIY coffee grinding, how Bach invented the blues and why he’s committed to preserving the Great American Songbook.

This video series was underwritten by the Claudia Mitchell Arts Fund of the Rappahannock Association for Art and Community — which, by the way, holds its annual Artists of Rappahannock Studio and Gallery Tour this year on Nov.4-5. It’s a great opportunity to meet some of the other artists profiled in this series, and get a first-hand look at their works.