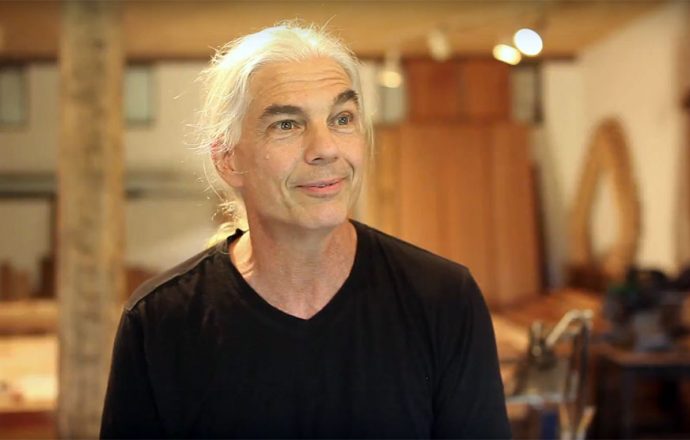 In our continuing series of videos on the Artists of Rappahannock, we move down the road a bit — and up a steep, narrow lane — for a too-brief visit with Sperryville furniture craftsman Bob Lucking, who apparently can make anything out of wood that you can think of (and quite a few things no one’s ever thought of). Bob’s hand-built home and workshop are carved into the side of a mountain just a stone’s throw from Shenandoah National Park, where Bob says he gets some of his best ideas out hiking with his dogs.

There were more than the usual number of extraordinary bits of this interview that we couldn’t fit into the finished video; one of them worth mentioning: A few years back, Bob and his wife, Carol, decided after Bob’s father became ill that he’d build a house next door for his mother and father — which he did. A few weeks before they were to move up from Florida, however, his father passed away. His mother, who’s 92 now, still lives right next door. “I’m not sure if I’m keeping an eye on her, or she’s keeping an eye on me,” he says, “but it works.”

Thanks to a generous 2016 grant by the Rappahannock Association for Arts and Community’s Claudia Mitchell Arts Fund, we are on track to have six short videos on Rappahannock’s amazingly diverse and talented artists completed by late September.

I’ve been working on two almost simultaneously over the past three weeks, so the video on plein air painter Nedra Smith should be online here — and on the Synergist Media YouTube Channel — by the end of this week as well. Please head over to YouTube and subscribe to our channel. I plan to keep making these videos through the end of the year, beyond the six that were originally supported by the Claudia Mitchell Fund grant.

Synergist Media, and especially these videos, would not be possible without the hands-on assistance of photographer and videographer extraordinaire Luke Christopher, and the full-hearted advice and support of Luke’s mom, Charmaine Lee, my wife, ally and inspiration.